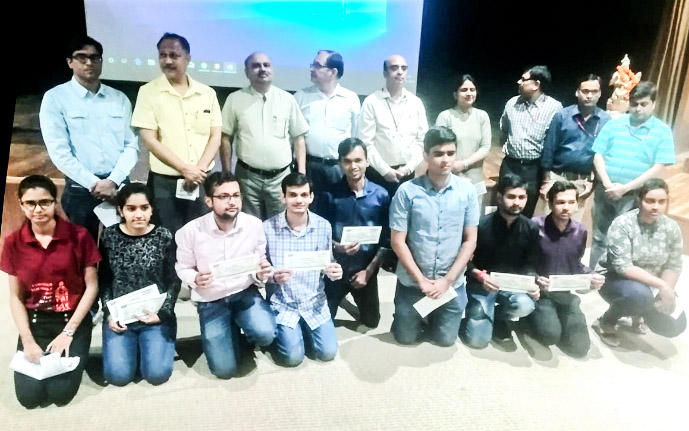 PNN/ Faridabad: J.C. Bose University of Science and Technology, YMCA, Faridabad in collaboration with NHPC Limited today organised various competitions as a part of Vigilance Awareness Week Celebration which is being celebrated from 28th October to 2nd November 2019 to commemorate the birth anniversary of Sardar Vallabhbhai Patel, known to be a man of high integrity. This year, the theme of the Vigilance Awareness Week is “Integrity – A way of life”. About 100 students participated in various competitions including declamation, poster making and essay writing.

Vice Chancellor Prof. Dinesh Kumar in his message said that the fight against corruption and to uphold the highest standards of integrity and honesty and act without fear or favour is the responsibility of the every citizen of the country. He appreciated the initiative of organising such an event to inculcate moral and ethical values and cultivate character building virtues among students.

Speaking on this occasion, Registrar Dr. S.K. Garg said that integrity is an important aspect of everyone’s life as it leads us to trust-building among colleagues and friends. Also, it is important to imbibe good habits early in life to build a successful career.

Arun Kumar Chaudhary said that integrity starts with being true to ourselves and living true to our purpose. He urged the students to be truthful to themselves.
Addressing the programme, L.K. Tripathi said that the purpose of observing Vigilance Awareness Week is to educate the public at large about the corruption related practices and also educating them how to report about it.

In declamation competition, the first prize has been won by Shrey Arora.  Matakshi Sharma and Rohan won the second and third prizes respectively. Similarly, Nitish stood first in essay writing competition whereas Rahul and Harshita stood second and third respectively. Yash Aggarwal bagged the first prize in poster making competition whereas the second prize has won by Rahul. The third prize jointly shared by Sourabh and Hemant. The participants were awarded with certificates and cash prizes by the chief guest.

The programme concluded with the administration of the integrity pledge to the students of the University by Director, Youth Welfare Dr. Pradeep Kumar. The programme was coordinated by Dr. Bindu Mangla and Dr. Umesh Kumar.