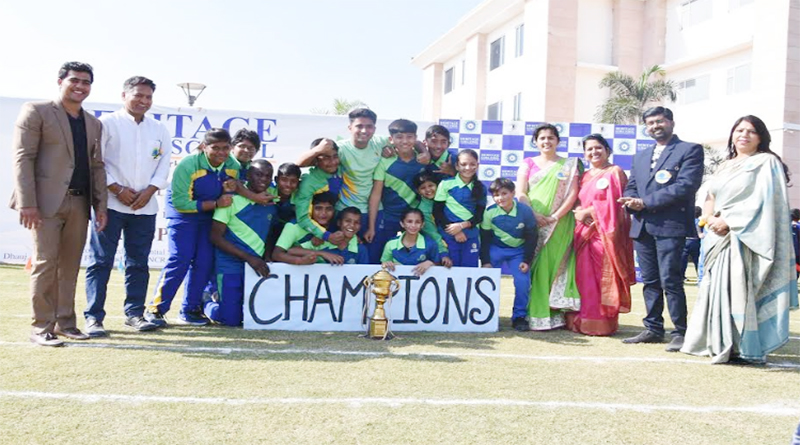 PNN/Faridabad: Heritage Global School, Faridabad held annual sports day with much fervor and passion. The guest for the event was Jatinder Singh, currently serves as the President of sterling Taekwondo association of India and is also associated with Delhi Police for self Defense training. He is a world Taekwondo Global master with an impressive count of medals to his hitty.
The high lights of the sports day were splendid field displays involving mass student participation and a well synchronized March Past by the four houses contingents of both Junior & Senior wing of students. The most intriguing aspect was the presentations by all the students. The Pre – Primary enthralled the audience with their fun –filled races which included Sack race, Flag Race and three begged race. This was followed by the track events including races like 50m, 100m & relay races. The Parents constantly applauded the participation and motivated them. Spreading a message of leading an active life and saying no to plastic, the students performed Zumba which as indeed captivating.

The audience was transported to the land of jungle by witnessing various look dances which was highlight of the day aimed at awakening us to not intrude into the realism of nature too much. Track events for the parents and staff members were also organized, in which they participated enthusiastically. The amazing achievements of India on International grounds at various sports events was also highlighted through a performance, ‘’ Shining India.’’
The guest was delighted to see the large numbers of young children participating enthusiastically. He appreciated the efforts of the participants and said that we all learn more outside the class

through the medium of sports which is like a rejuvenating therapy for all. The performance reaped many laurels by one and all. The Prize distribution ceremony was also organized where the chief guest and the Principal Rakhi Verma gave away Medals and Trophies to the winners of all categories. The AARD houses was adjudged the best and was awarded, the trophy. In the closing ceremony, the meet was declared closed by the chief guest. The vote of thanks was proposed by the Principal who expressed her gratitude to the audience for their presence and congratulated the staff and the students for the spectaculars show and the meet serve its culmination with the National Anthem.