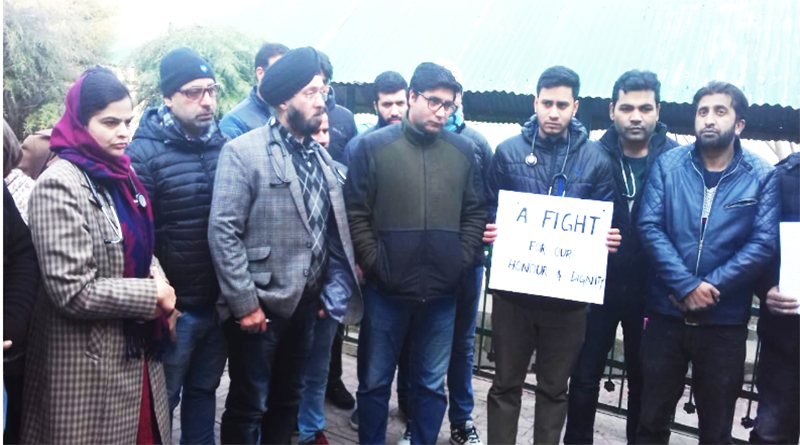 The Misbehavior of Dy. Mayor Srinagar with Doctors and Paramedical staff on duty in Chest Disease Hospital Srinagar is Shameful and leads to inconvenience and disturbance among the patients and doctors.

It has seen from the recent past that ward members, Panchs Sarpanchs and now Deputy Mayor are routinely interfering in hospitals to get political mileage as hospitals remain flooded with the public just to show their power and get publicity stint by creating something out of nothing to pretend that they care for public which is far from truth.

Doctors who are working 24×7 are public servants not bonded labors, any misuse of power arrogance can turn things more ugly or things can go bad to worse.

Doctors in hospitals are working round the clock through every situation and disaster for which they need to be appreciated not awarded with abusive language and misbehaviors.

Such interference has become a common phenomenon rather than interfering in technical issues of the medical profession, it should be better for them to focus on hospital sanitation, drainage, water supply, and electricity.”

“This illegitimate and illiterate behaviour of any official cannot be accepted under any circumstances. Misuse of power arrogance creates inconvenience among doctors & patients. We give our 100% to treat and serve our patients, don’t need any advice from anyone as we fully know how sacred our profession is and what it demands from us, better for him would have been to focus on hospital sanitation, drainage, water supply, and electricity” said Dr Naveed (Chest Specialist CD hospital Srinagar).

The abusive language and misbehaviour of Dy. Mayor Srinagar with Doctors and Paramedical staff on duty at Chest Disease hospital Dalgate Srinagar shows the unnecessary interference of elected representatives who instead looking at administrative weakness are interfering in those things which even doesn’t come under their domain.

“Patients were being referred to SMHS Hospital. No proper heating arrangements were made at the hospital,” the deputy mayor said, adding that he intervened only after seeing a person with disability waiting for hours outside the doctor’s room. “The patient should have been examined in the casualty department,” said Deputy Mayor Sheikh Imran.

“From his physical and verbal gestures, it does not seem he has got the education from a western country. It was better for him to get moral education from some primary school of Kashmir,” said Dr Suhail Naik DAK president.

“He was not ready to listen to us and it seems that as if he entered any battlefield rather than a hospital and start shouting on us nonstop without any sense”, said Dr Khursheed.