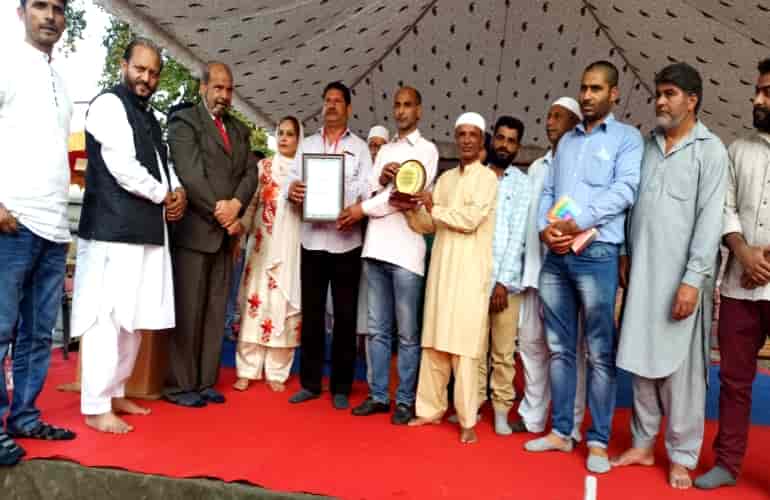 PNN/ Srinagar, (Rayees Ahamad): Divisional Commissioner Kashmir P.K. pole, Jenab Junaid Mattu Mayor of Srinagar City appreciated Khwaja Farooq Renzushah, for organising International Grand Sufi Hanafi Conference at Virasat Garden of kashmir. The Distinguished Sajadah Nisheen of hundreds of Sufi Hanafi shrines of kashmir addressed August Audience at Iconic 700 years old Spiritual Sufi Virasat Garden Bonni Bagh Dalgate where Enumerable Chinar trees have been planted by Sufi saints, witnessed first time Grand Sufi Hanafi Conference organised by kashmir Society international along Gee Gee productions, Jamaat Aitqaad Hanafiya international, Scouts & Guides and Sufinama kashmir. It is for the first time in history of Sufi Varasat in kashmir such massive full day Sufi Hanafi conference was organised at this spiritual abode. Unfortunatly this Virasat Garden stands at present in Vanishing stage as no attention was given for last 70 years to Revive its spritual importance and make New Generation aware how distinguished Sufi saints had composed their valuable verses in this Mystic Garden which was rendered to stage of destruction by those forces who never projected the Civilization of kashmir in it’s right perspectives.
Divisional Commissioner in his address said that it is need of an hour to encourage Sufi thoughts of kashmir which are authentic Symbols of our Composit Culture. He said that conflicts and contradictions can be over prevailed with the power of synergy of ideologies bases on mutual love and Brotherhood.
Mayor of City jenab Junaid Mattu said that in present emerging Situation in Sub continent where Some radical ideologies are being backed by Violence can only be neutralised by Sufiyat and ideologies of love and peace. He assured Chairman Kashmir Society about full support of SMC for organizing such sufi Hanafi functions in each area to pay Tributes to our Great Awaliyas. On this occassion each Chinar tree of Bonibagh was named in each Awaliya whose verses were recited full day inviting unprecedented gathering .
In todays series of International standard of conference, most significant spritual personalities of past as well as Living sufi legend of area Faqeer-e-Milat Shykh Mohammad Abdullah were presented. In nine segments. Spritual Singers Nawat and Mankabat khwans recited simultaneously kalams (verses ) of Jenab Shams Faqeer, Jenab Samad Mir, Jenab Nund Hafiz, Hazrat Ahad Shykh, Jenab Ama Khwaja, Jenab Sultan Bhat sahib, Jenab Madhosh sahib, jenab Samad Mir sahib. The spritual Sufi books of Hazrat Mout Mumtaz jenab Jam e Rahman Jenab Faqeer karim of pulwama and Faqeer Milat of Dalgate Shykh Mohammad Abdullah were released by Divisional Commissioner of Kashmir Pole, The Mayor of SMC jenab Junaid Matto and chairman Kashmir Society international Renzushah and most distinguished personalities from Various Hanafi Sufi abodes and shrines of kashmir.
The chairman kashmir Society Khwaja Farooq Renzushah in his welcome address said that kashmir is bestowed by Allah with its extraordinary blessings, beauties and above all intellect. He said that the verses of all sufi saints of kashmir are our intellectual treasures and every kashmiri should be proud of Sufi Varasat. He said that this spritual Garden where Chinar trees have been planted by all Iconic Sufi Awaliyas including Bulbuk Shah Amir Kabir, Makhdoom Sahib, Shykh-ul-Aalam has been completly ignored rather destroyed during last 70 years. He said no less than a person than present Prime Minister of India in parliament said that Hazrat Bulbul shah, Hazrat Nund Reshi and Hazrat Amir kabir Mir Syed Hamdani are true spritual identities of kashmir. He said that to reverse damage caused to Sufi Varasat during last 70 years it becomes imperative for every right thinking Person who believes in Love of humanity and mutual coexistence that the treasure of verses compiled by our great Sufi saints under shadow of these Magnificent Chinar trees are preserved And protected. He Said no serious step was taken to show case Sufi Warasat of kashmir to world because of influence of radical ideologies who had captured administration. As proxies from inside these forces and perpetrators of Violence either concealed verses of these Sufi saints Or engineered to burn 72 lakh Sufi Hanafi books by destroying Libraries.They discouraged Spritual music under Radical doctrines.They never allowed Kashmir to purify souls and breathe under these chinar trees to read each spritual verse of Love of humanity still engraved on each leave of these magnificent trees symbol of our hhat 0ur sufi Awaliyas succeeded to keep people of kashmir away from violence conflicts & hate. He said presentation of this kind of programme based on Sufiyat and extraordinary response shown by people by participating in it with full spritual enthusiasm has further encouraged us to cover all sufi saints of kashmir in series in addition to these seven sufi saints selected for this historic conference .
On this occassion internationally acclaimed Sufi Singers Gulzar Ganaie presented Ism-e-Azam of Lala sahib Revered father of Renzushah others sang with their mismerising voices kalams of nine Sufi Saints And Living legendary of Same area Faqeer Milat Jenab Shykh Mohammad Abdullah Faqeer. The publicity secretary Zafar Bhat presented Research paper on the occassion.
The Divisional Commissiiner in his speach said that it was because of introduction of wrong ideologies of violence the orginal Sufi ideologies remained under supression. He congratulated khwaja Renzushah for organising this historical conference in This spritual Park.
Sufi Scholars delivered their research papers on these seven Iconic Sufi saints and their verses. in its second conference verses of further seven Sufi saints will be presented same way and the series will continue till treasure verses of all presented in all nooks and corners if valley so that world realizes importance of the strength of our Sufi Warasat. on this occassion Award certificates of honour were accorded to.